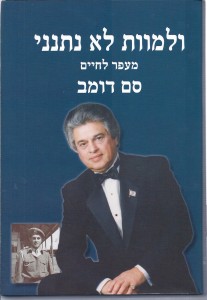 “Victory was to be bought so dear as to be almost indistinguishable from defeat.”
Winston Churchill, The World Crisis

Everything went well. The Russian officer stood by his word and saw to it that we got on the military train. This time we traveled with Father. Although she no longer bore the same heavy responsibility, Ita continued to maintain firm control over the situation; and Father, who had always known she was reliable, admired her performance. He was also very impressed with the level of our cooperation. Ita issued few instructions; a facial expression or simple hint was sufficient for everyone to understand their task. After four years of wandering, we had learned to obey her.
Each sibling knew what to carry and which place to occupy as we walked. Sara carried one bundle, Zipporah the other and I, of course, also had something small to carry. Our walking pattern was also clear. Ita was always in the rear, with me in front of her and Sara and Zipporah ahead of me, holding hands. Ita carried the heavy traveling sack and occasionally held my hand. I walked next to, or in front of her.
This system gave Ita full control of the group, allowing her to maintain constant eye contact with us. This is how we now walked to the train station in Kutaisi, although this time, Father carried the heavy bundle.
The train departed and we breathed a sigh of relief. The trip to Lodz was not short and it took many days to travel the almost 1,250-mile distance from Kutaisi. We had to get to Warsaw first and then board another train to Lodz. It stopped at many stations along the way and we had to change trains occasionally, sometimes being forced to wait several days until the next one arrived.

This time we were calmer and did not fear explosions or bombings. Father and Ita supplied us with food we had received from the Jewish community and from the army. No one rushed us or tyrannized us now, but the unknown future and the effect of our sad situation—utter poverty and dependence on relief organizations—was visible on Father’s face. Ita attempted to ease some of the tension: “This war involved many countries, and many people lost their dear ones and all their property, becoming refugees like us. The numbers are not small—even if we only consider what we ourselves witnessed firsthand, we’re talking about hundreds of thousands of refugees. It makes no sense that a solution cannot be found for these people, innocent citizens caught up in a situation not of their own making. The countries involved will, surely assume responsibility and try to find answers. It will take some time, but a solution will eventually be found.”
Nodding, Father responded: “I definitely agree with you that a solution must be found. This cursed war brought misery to tens of millions of people, destroying entire countries, and that is no simple matter. The question is how long it will take to find a solution and how will the refugees be treated and their lives rehabilitated. We must remember that this was not an ordinary war, but a world war in which a large number of countries took part, something that has never happened before. Civilian populations suffered in previous wars, but not as in this one. Never before were special concentration camps established for human slaughter using poisonous gas. In this war, people were separated from their families, exiled, deported and cruelly murdered for no reason. Millions were killed, first and foremost amongst them Jews, out of pure racist ideology, with meticulous planning, torture and starvation; and all of it by means of a wide variety of deceptions, in order to disguise the atrocities.”

Ita opened one of the food packages and distributed our portions of food. In giving Father his, she said: “I hope that the rehabilitation will be conducted with the same diligence as the unwavering decision to defeat Germany. Indeed, the Germans should pay for the horrible injustice they inflicted and all the murderers and their collaborators should be put on trial. It’s inconceivable that they will emerge innocent from this war that they forced upon the whole world.”
Father was moved by Ita’s words: “You are correct, my daughter. Let us hope that justice will prevail. I cannot even think what a suitable price would be for the Nazis’ barbarism. I recall the biblical commandment regarding Amalek: “Remember what Amalek did to you… You shall blot out the memory of Amalek from under heaven. Do not forget!” (Deuteronomy 25: 17-19). I never understood this biblical commandment—to eradicate the memory of a nation. Today, after witnessing the horrors inflicted by the Nazi beast during the war they imposed on us, I am beginning to understand this divine commandment. Some people estimate the number of war victims to be fifty million—an unfathomable sum! The brutal slaughter of Jews and the vicious murder of other peoples who had gone to war in defense of the world.”
The train slowed down and stopped in the center of some city whose station was packed with what looked like refugees wanting to return home. There were ruined houses and huge collapsed buildings on both sides of the track. Amidst the ruins, I detected many people rummaging through the piles.

From experience with long, difficult train journeys, we knew how to pass the time. I listened to the conversations Father held with Ita and did not stop thinking about them for even a moment. Father, too, was deep in his thoughts and occasionally shared them with us. With a deeply pained look, he said: “One of the things distressing me so much is that I was deprived of the opportunity to educate my children properly—both at home and also in formal school education. For this, too, I will never forgive the Germans.” He cleared his throat and his voice caught before he continued, speaking as if testifying in some court: “In their critical years, my children did not have the chance to attend school, nor did they experience a tiny bit of the love and warmth of a father’s home. Here, my young son, Shulem’keh, in his first decade of life has not yet been to school to learn how to read and write, like every normal child the world over. Ita, Sara and Zipporah had their education interrupted at its beginning. Their childhood years, meant to be filled with the joy of youth and abundant family love and warmth, were stolen from them and replaced with evil, cruelty, suffering and wandering. How can we recuperate what was lost while we are still wandering empty-handed?”
Seeing how Father’s words affected all of us, Ita, in her great wisdom, interrupted his pondering and tried to generate more optimism: “Father, it’s pointless to dwell on what was. We’re young and capable of doing anything. This was not the first war ever, nor do I assume it will be the last. People have rehabilitated their lives after wars, and countries have recovered. I recall your telling us how terrible World War I was; yet, despite its difficult outcome, people were able to resume their lives after that war as well. I know it will not be easy, but look around you: Sara, Zipporah, Shulem’keh and I accomplished the impossible during the last five terrifying years, surviving without parents.”

Taking a deep breath and sighing deeply, Ita continued: “Do you doubt our ability to withstand the challenges awaiting us after the war? True, it’s unfortunate that we were denied a formal education and the parental warmth and love to which every child is entitled, but we’re older now and will know how to overcome this. Don’t torture yourself with unnecessary thoughts. Although it’s important to remember what was, it is no less important to rebuild our family.”
“Every day is valuable; and since we are penniless, we must first find an organization that will help us. Your decision to bring us to Lodz was, therefore, very wise. I see Shulem’keh and my sisters: after all we endured together, there is no obstacle to success that we cannot surmount. I know that difficult days await us, but nothing can compare to what we have already been through. A person who knows how to cross rushing rivers and survive, will be able to easily skip over small streams.”
Having concluded speaking, Ita looked at me and gave me a secret wink as a reminder of when I crossed the river. She handed Father a cup of water to calm him down. I was very moved by my oldest sister’s wise words. Once again, the image of the bombed bridge on the way to Kutaisi, when I crossed the river, came to my mind. It seems that Ita’s optimism pacified us all. I noticed that she did not mention Mother, probably to avoid adding to my father’s and our sorrow.

The trip to Warsaw lasted several weeks. We often stopped on the way to change trains and by the time we arrived at our final station in the capital, the major destruction sowed there by the German bombs was clearly visible. We had seen many bombed cities during the trip, but had never encountered the extensive ruins we saw in Warsaw.
Father related that upon its occupation by the Germans, the city became part of the Generalgouvernement—territory that was under German control. On that same day, the order was given to close all schools and to round up the Jewish population—300,000 residents—in a ghetto (The Warsaw Ghetto). When the Germans decided to liquidate it as part of the Final Solution, an uprising of the Jews broke out in the ghetto (The Warsaw Ghetto Uprising), and a bloody battle ensued. The resistance fighters held out for a month but, in the end, the Germans cruelly suppressed the revolt and almost all the rebels were murdered.
Father also recounted what he had heard in the Russian army base where he had served, that in July 1944, the Red Army in Poland liberated extensive territories from the Germans. The Russians advanced and reached a point eighteen miles from Warsaw. The Polish government-in-exile, sitting in London, instructed the Polish underground to try and take control of the capital before the Red Army entered. The underground began a rebellion against the Germans (known as The Warsaw Rebellion), which lasted sixty-three days, but ultimately failed. Although located near Warsaw, the Soviets did nothing to assist the rebels. In reaction to the rebellion, Hitler ordered the total destruction of Warsaw, for which a special unit was established, tasked with bombing all government structures in the city as well as many residential buildings. 800,000 people met their death in the battle for the city! All this explains the degree of terrible destruction we are seeing,” Father pointed out. We were shocked at what he said. How could any human being contemplate carrying out such acts?